We left around 6pm at night- that was the first mistake. It was the weekend and Moab is about 3 hours away from where we live. This means that we’d be arriving past 9pm – and the likelihood of us finding a camping spot was pretty slim. The drive was like any other, but since we were getting on the road late, we decided to stop in the town of Price grab dinner on the way. We ended up rolling into Moab around 9:30 and that’s when the search began… I had done some research beforehand in order to try and find a campground that was further from Hwy 128 and seemed like it would have less people. I had noticed that most of the campgrounds along the 128 are either sandwiched between the Colorado River and the highway.  It was on the BLM website I was able to find a campground about 22 miles up the 128 called Fisher Towers. I was pretty confident we were going to find a spot, but as we pulled through the campground, there was nothing. It was getting late, our cell service sucks which meant google maps wouldn’t work, so I had no idea where to go. We tried exploring a couple side roads to see if there was anywhere to camp for the night, but they all had “no camping” signs. I was getting more than frustrated at this point. Usually things like this don’t bother me, but it was a little after 11pm at this point and I was tired of driving around. I then remembered one last camp ground a couple miles further up the 128 from Fisher Towers campground. I had no hopes of finding a place, but we tried it anyways and low and behold there was one spot left. Our final arrival time? 11:45pm.

We quickly and quietly as possible – as not to disturb our fellow camping neighbors – set up our tent, laid out our pads and sleeping bags. the boys were all tired, so after their jammies were on and teeth brushed they feel asleep pretty fast. My main worry was the baby… 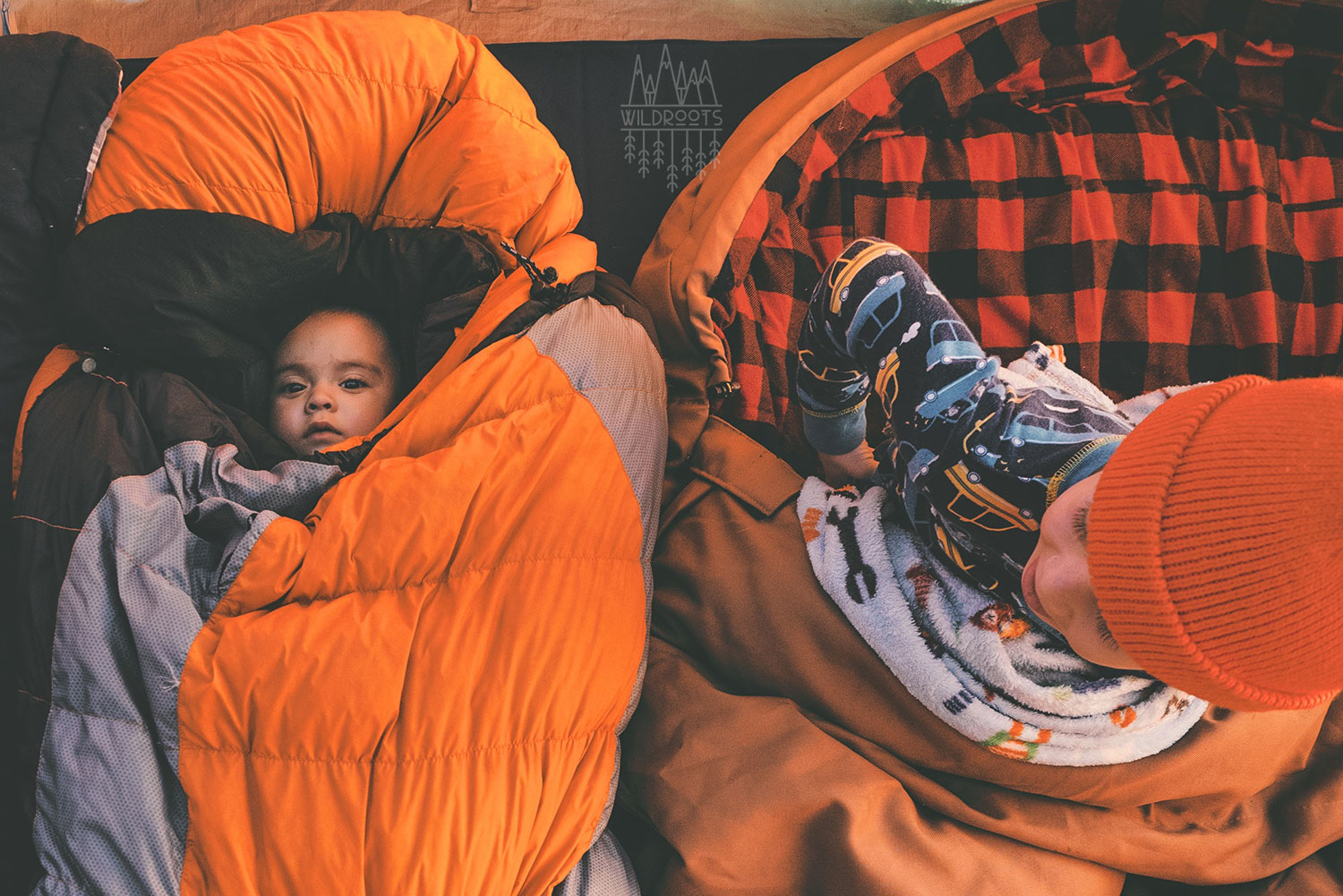 I had already figured out how I was going to take care of his nightly feeding: I boiled water with my Jetboil and than kept it in a thermos. I stuck his water, formula and bottle at the foot of my sleeping bag. With this being our first camping trip with Shem (who was a premie and now 7 months old), I was pretty dang nervous of him getting cold or rolling over in the sleeping bag and smothering himself. For the first hour I was up worrying… I would constantly check him to see if he was cold or move the sleeping bag further away from his face but eventually I finally fell sleep! It was around 3:30am Shem started to fuss, as his mother I knew right away that he was hungry. I summoned Nate to help me, but he is in a sleep coma, so he was basically useless until he came to. Typical dad, right?! It was suppose be fast and easy since everything was prepared earlier but as I was pouring the water into the bottle I realized that due to the cold temps (it got down to below freezing that night) the water had become cold…this is when it got crazy!  I shook Nate until he woke up and asked him to hold Shem who was now not fussing but screaming bloody murder (as babies often do when they want to eat!)… I then had to reheat the water. The Zombie, held Shem and tried to keep him quite while I tried to take care of the bottle as fast as humanly possible, but nothing would sooth that soul, but the taste of warm milk.  Luckily, the quick and ease of the Jetboil saved me and my fellow campers from enduring an unhappy baby for long. I had never experienced Shem’s screaming before… he has always been a happy and content baby. Finally the boy got what he wanted, I didn’t hear anyone yell “shut that baby up!!!” and the other boys somehow slept through Shem’s screaming so I counted it as a win. I softly patted his bum and gave him his soft blanket and he was back to sleep in no time. Phew! A little more excitement then we anticipated in the middle of the night but it turned out ok all things considered!
When camping with young children I’ve realized that even if they go to bed late they always wake up at the butt crack of dawn… it’s taken a while to embrace this, but it also allows us to get so much more out of our days. We’ve made it a habit that when we do overnighters we pack up the next morning, so we have the freedom to explore all day without having to worry about rushing back to the camp to pack up. Nate and I have a a pretty good routine, I pack up the stuff in the tent while he loads the car. It works out great and makes things so much easier when everyone has a role/job to do – especially with my husbands ADD. 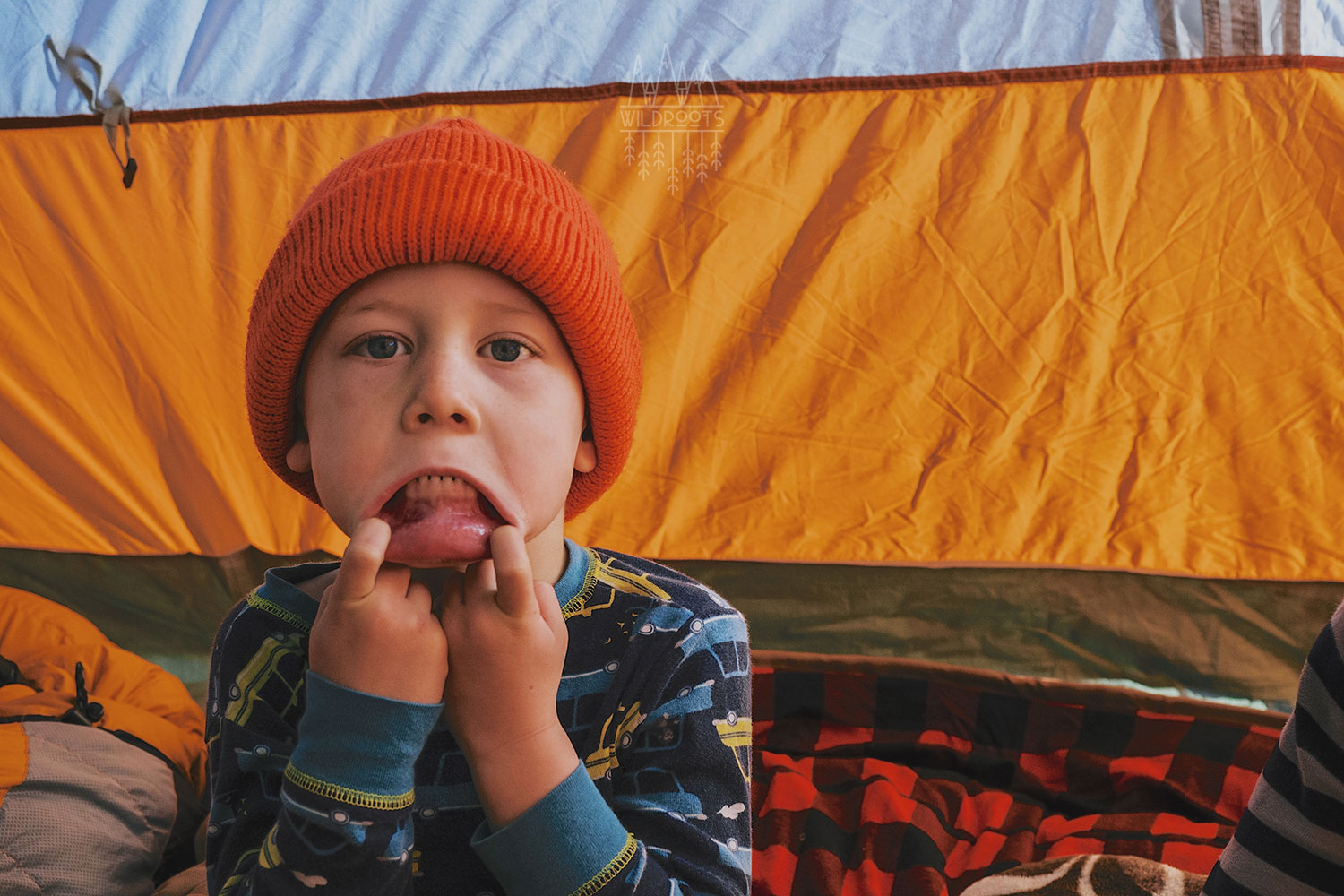 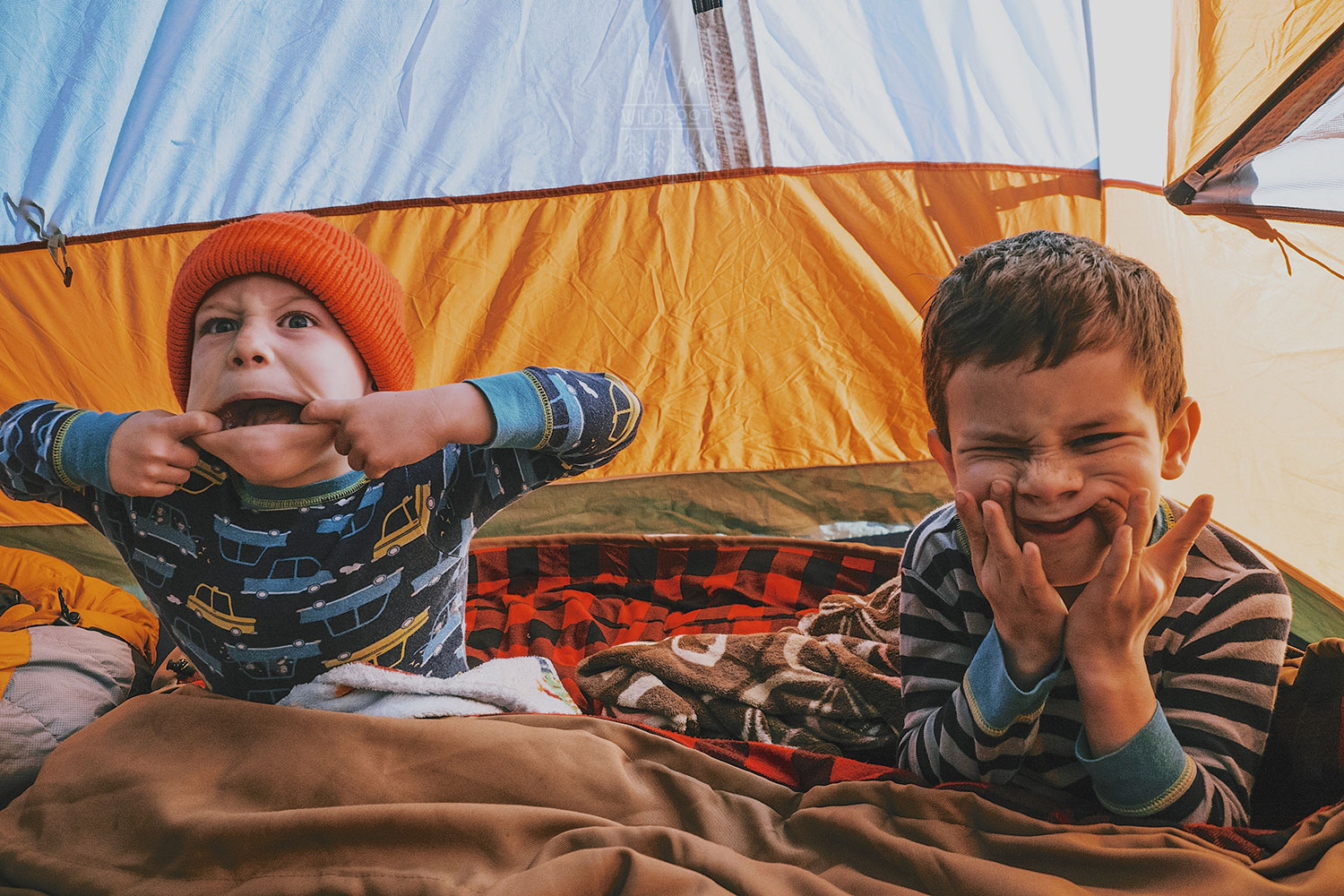 Every camping trip we end up learning a few things to help with the next trips. Little did we know that on this trip we’d be in for a HEAVY learning lesson. Since Shem was born premature in the middle of the previous summer, it had been awhile since we had last camped and our routine was kind of rusty. While I was in the tent packing up and Nate was outside getting the gear put away I assumed that Nate was watching the kids. I would look out the tent window once in awhile to do a head count and than go back to rolling the pads and stuffing the sleeping bags. When the inside of the tent was done and I emerged from the tent I did another head count. One of the kids were missing… the 2 year old, Liam… at first I quickly scanned for him and asked his older brothers if they knew where he was and they pointed to the large cattail bushes. Nate sprinted over and told me he wasn’t there and only then told me that there was a large river on the other side of the thick bushes. My heart immediately dropped and panic came flooding into my mind and body. I noticed a government recreation crew camping next to us and I somewhat frantically asked them to help. I gave them a quick description of him and we all started franticly looking for him. There was so much fear running trough my head of the possibility he could be in that river, anger of who I thought was responsible for him missing, and sadness of not knowing how I would cope if he was indeed gone forever. I looked up towards the car and had the thought that I should double check it. Low and behold, he was hiding in the back of the car pooping in his diaper and sneaking red licorice. I had so many emotions at that time, I was overjoyed that we found him, angry he was hiding and not answering when his name was called, sick to my stomach of what it would have been like if I lost him, and the empathy for those who have lost a child. You all are probably thinking “get a grip lady”, but until you have gone through it yourself you can only imagine what the emotions would feel like. Now that all the kids were accounted for we strapped Liam in his seat and said a quick prayer thanking God. Nate and I made it a steadfast rule to make sure to clearly communicate who was watching who, so we always knew who was responsible for watching the kids rather than assume the other had it handled. Such a scary but important lesson to learn and boy did we feel dumb/grateful. 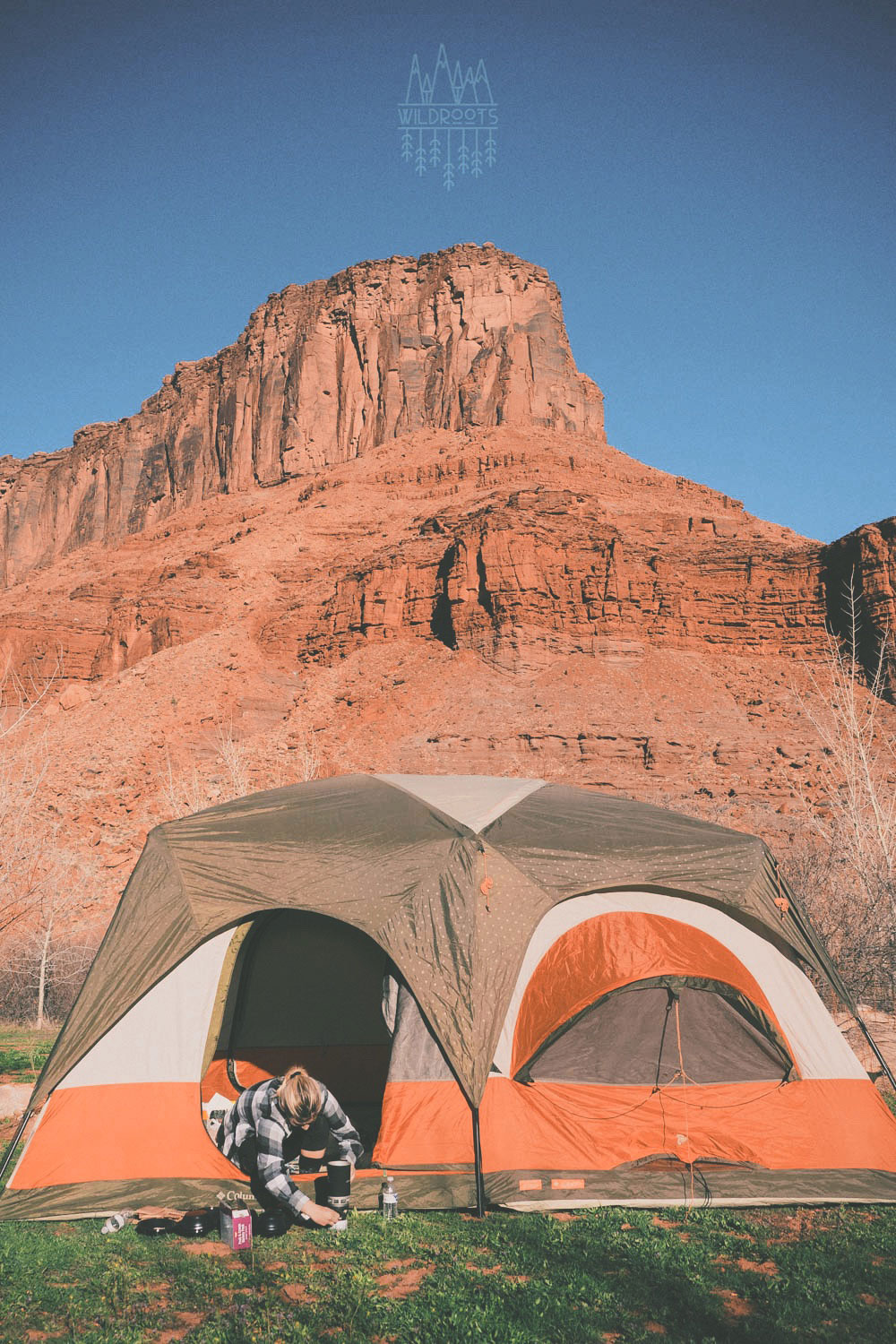 I’m from California, so I’m still getting exposed to more and more of the state, so before our trip I reached out to Lisa to find out some new places to check out. She said Fisher Towers was a must. We had been to Moab the weekend before with Nate’s family and spent time in Arches, but hadn’t explored outside the park yet. Fisher Towers is not in the park, but is still a popular hike. Our campground was nearby so we were able to get to the Fisher Towers trailhead earlier in the day which also made it easier for us to find a parking spot since the parking lot is pretty tiny. Fisher Towers was amazing and definitely not what I was expecting at all… I was use to seeing the large smooth cliff sides and arches in the Park, but this brought a whole new kind of awe… these were ginormous, rugged sandstone towers! My mind was blown by all the shapes that had been eroded. We only hiked to the half way lookout, because even though we were having a mild winter, we weren’t used to the heat so early in March! It was getting hot and the kids depleted our water supply fast. The hike was pretty mild for Zev (6) and Kai (4), but for Liam’s (2) little legs took a bit longer with some of the ascents/descents. He alternated between hitching a ride on the way in and walking on his own. On the way out; however, he stayed back with dad and managed to make the whole hike by himself. It took us a good 3 hours to hike the 2.5 miles and by the time we were back at the car it was getting HOT. 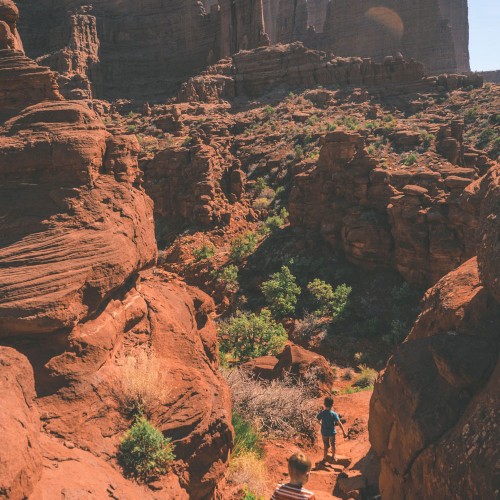 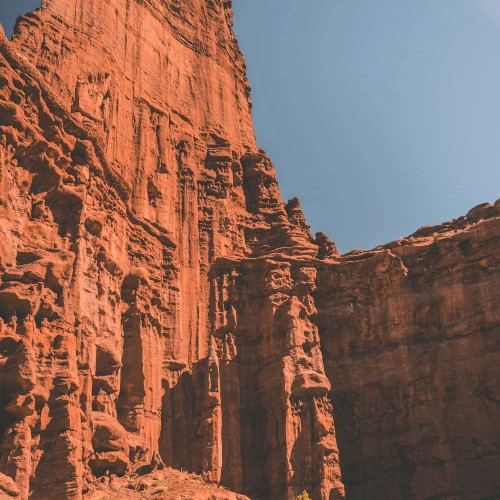 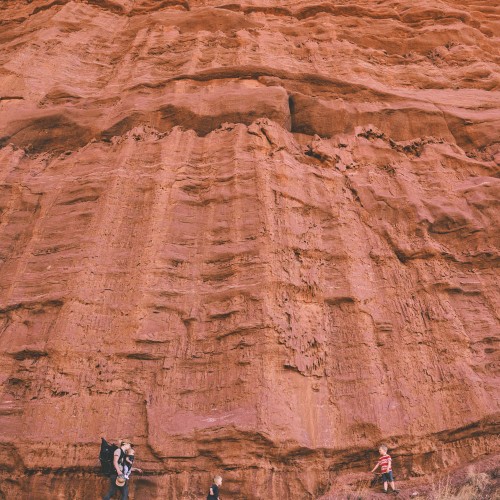 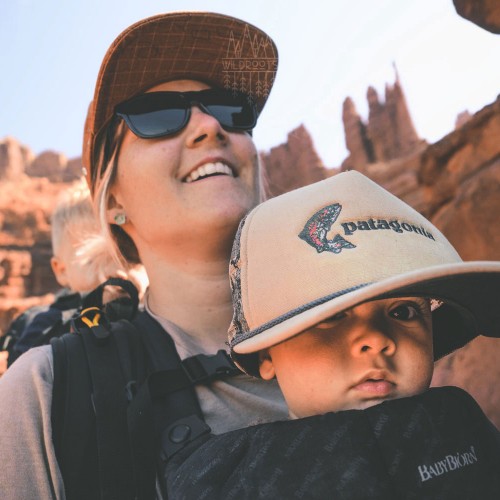 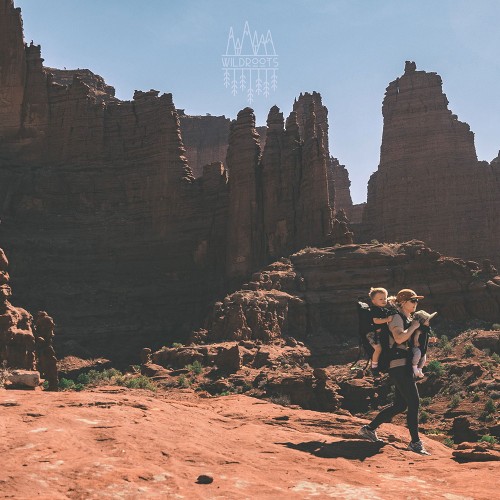 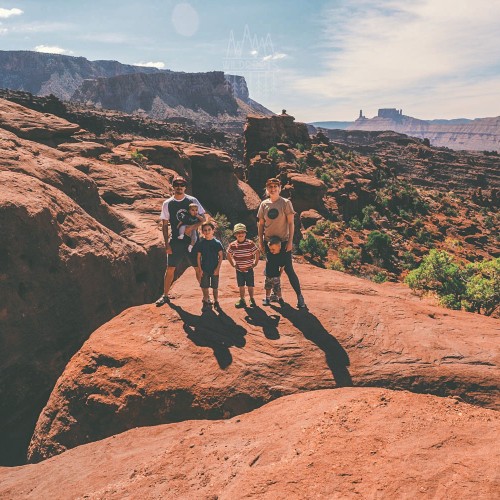 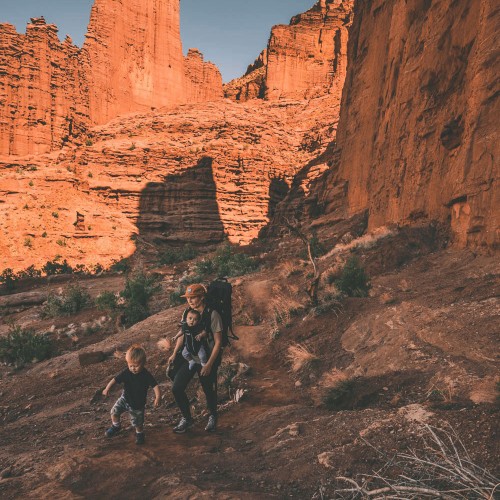 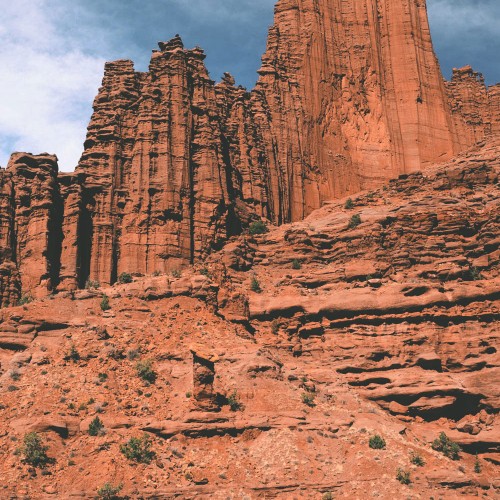 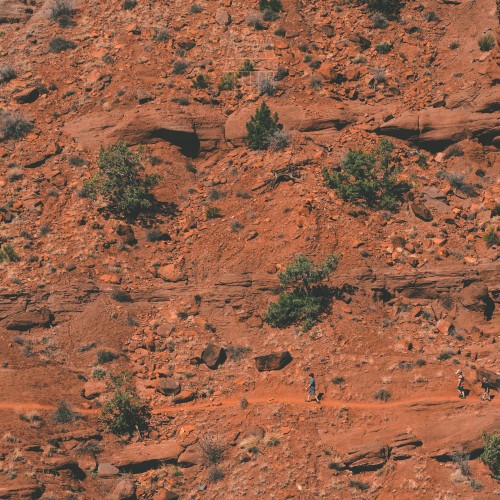 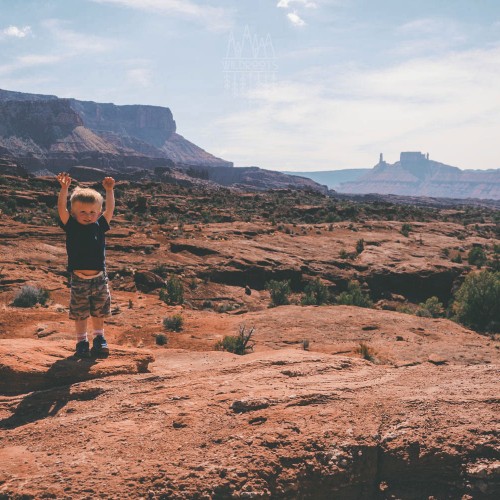 We decided to head into town to grab another Nalgene bottle and fill up on water. There’s a store in town (Gearheads) which was heaven on earth… this place was filled top to bottom all four sides with gear… what should have taken 5 minutes took more like 20. It wasnt bad because while Nate checked the store out, got more water, and took the boys number 2, I made lunch and we had a little tailgate lunch party and were able to chat with some rad toursist that had some incredible stories of what brought them to Moab. Lunch was over and we were all refueled and ready for more. The weekend before we had a list of places we wanted to visit in Arches, but the weather went from low 60’s to blizzard within an hour, so we missed some spots on my list. Sand Dune Arch was on my list and this week with it being so hot, I’m glad it was. Sand Dune Arch is fantastic for families, and relaxing at the end of a long day of hiking- it’s completely shaded late afternoon, so you can enjoy beauty while staying cool. The hike is not a hike at all, its a nice stroll to the middle of huge boulders and the ground is nothing but soft sand. My kids were in heaven… they would jump offf rocks into the sand and race down the hill bellow the arch and just climb around like wild animals! We stayed there for a good 2 hours and my kids still were begging to stay longer, but the sun was starting to set and we need to start heading home. We were treated to some great light as the sun set and Nate ran around like a crazy person trying to make the most of it. 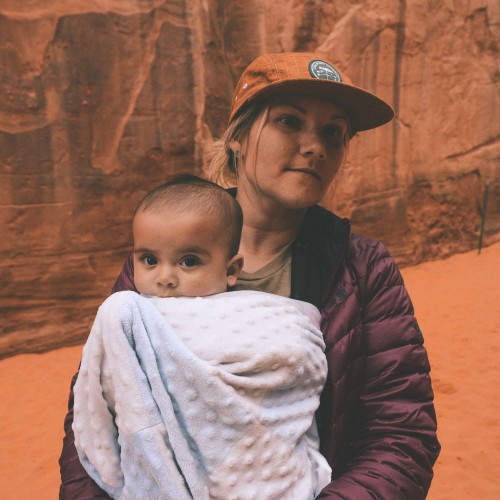 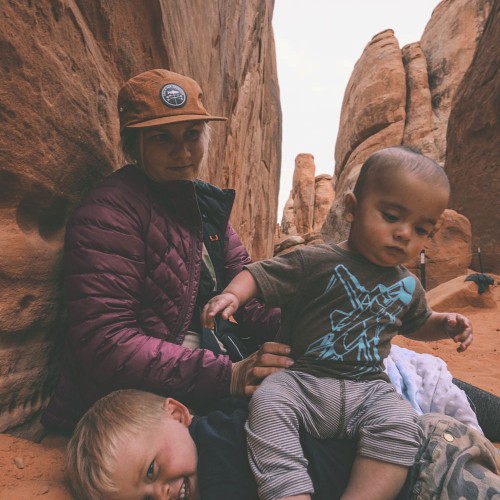 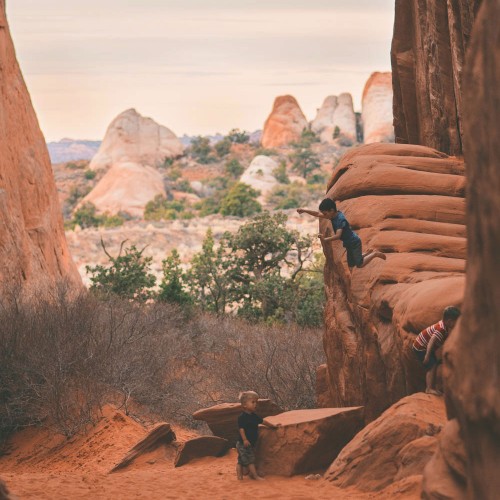 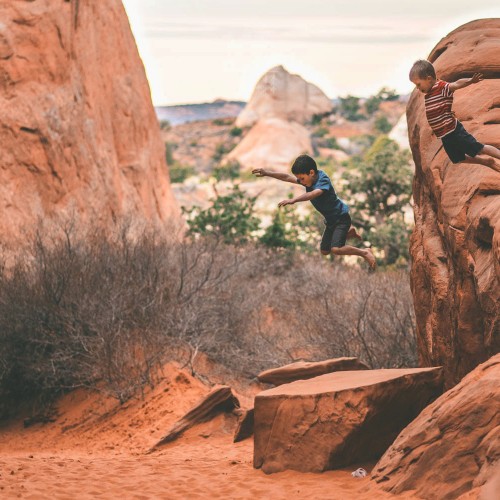 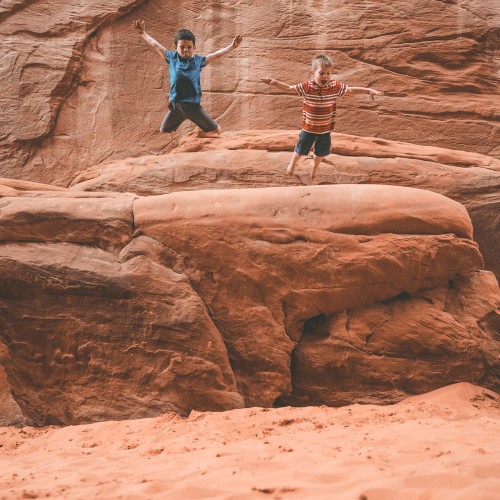 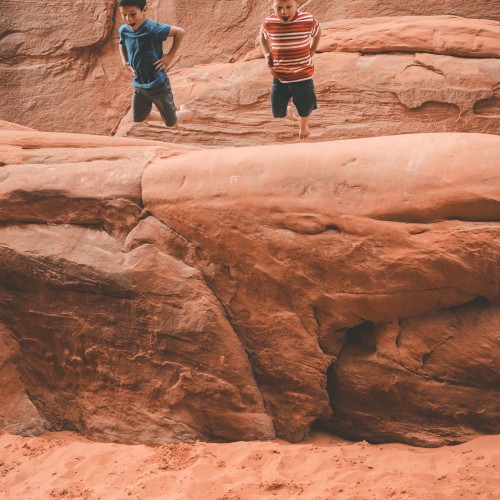 All in all, little Shem’s first trip was a success. It didn’t go exactly as planned but trips like this rarely do! We went home a little wiser and with another awesome weekend under the belt!